The Nightmare Layover in Fiji

The Nightmare Layover in Nadi, Fiji

36 hours in Fiji is not nearly enough time to enjoy this exotic island, especially during the Bula Fiji festival. But that is just what we did when we had our layover in Nadi on our way back to the United States from Australia, or at least what we had planned to do before tragedy struck. It’s been five years since this horrific event happened so I decided it was time. Time to get it off my chest and allow it to be used for entertainment as I can now finally look back and laugh about it.

This is far from a typical post of ours, and I’m sorry in advance that I won’t be highlighting the beauty of the exotic Fijian Islands. Quite frankly, I can’t remember much of anything about the small slice of paradise I did experience. Rather I write this because it’s important to know that in reality, travel is NOT always awesome, beautiful, and glamorous. My story here proves that in its entirety as it’s one of my worst travel fails to date.

How did we end up at Bula Fiji?

After wrapping up our summer mission work in Australia with a group of our college friends, Kallsy and I had a 36-hour layover in Fiji. We arrived at what we thought would be a perfect time; the Bula Fiji Festival was in works, a festival with many fairs, food vendors, singing, and dancing. Nadi is much different than the typical Fiji that you imagine with white sand beaches and crystal clear water rather the city center is filled with a hustle of local residents, markets, food vendors, and homes.

We arrived in the late afternoon and took a taxi to our small motel on the main Island in Nadi. After checking in we were famished! We walked to a nearby Thai restaurant to settle down to a nice dinner to which was the start of some very eventful experiences in the hours that followed. Still a vegetarian at the time, Kallsy ordered some Thai noodles and a soup whereas I ordered chicken skewers, noodles, and more (after all, I was starving!).

After eating we all went back to our motel and rested as we planned to be up early the next morning. Instead, all night I kept waking up with terrible stomach pain to which nothing was happening or working to relieve it. Ever have that feeling of nausea that just won’t go away? That’s what this was.

I took antacids, nothing. I then took an anti-diarrheal to be precautionary and attempted to go back to sleep. After what seemed like an eternity of lying in bed restless, I finally slept a few hours before the alarm was destined to go off.

The next morning Kallsy awoke her normal, chipper self (she’s one of those that likes to sing and talk in the morning) whereas I do not and after having very little sleep, and still feeling like I was about to keel over from my stomachache, I was extremely irritable.

We had planned to go on a day cruise to one of the nearby islands which we found for 35USD per person but due to my constant sweating paranoia of being close to the bathroom (just in case), we decided it would be smart to stay on the main island rather than on a boat and remote island. We thought we could possibly find our way to a nearby beach and explore the markets/festival with our friends.

Since I wasn’t feeling adventurous with the cuisine, we all agreed to eat at the local Hard Rock Café. After all, it’s a chain restaurant so it was sure to have some safe options. Thinking if I ate some regular grub I might get to feeling better I ordered a sandwich and some fries, after eating a few bites of the sandwich I started feeling even iller so I set it aside and began to chug water as quickly as our waitress would bring it out. The water seemed to help and we decided to head off to the nearby markets and Bula Festival.

As I stated before, Nadi is far from typical when most think of Fiji, however, there was certainly a peculiar charm to this main area where locals live and thrive. We explored many nearby markets and talked to locals and I was beginning to feel much better! Until…

All around Fiji you would see taxi buses outside restaurants and shops that would take local people from place to place.

A local market in Nadi where many locals and street food vendors come to purchase produce.

A shopping center in Nadi along with a restaurant.

Many of the market areas and shops did not have regular windows.

A Carnival of Horrors at Bula Fiji

So, let me ask you a question: If you walk by a Bula Fiji carnival and noticed that none of the rides are moving and there was virtually no one there minus the people running the show, would you run up and ask for a ride? A sensible person would say no. But Kallsy, being the fearless wild child she runs up to the nearest ride. Before I could catch up she was high in the sky on the creakiest, sketchiest Ferris wheel I’ve ever seen to this day.

The whole time I stood below looking up as I watched in horror as bolts, screws, and who knows what else began to fly out of the cars like confetti. Kallsy, still oblivious to her apparent possible death, was throwing her hands out the side and laughing at my distressed look. Somehow she survived. Once off the death trap, I didn’t even have it in me to tell her that she should get a tetanus shot immediately upon arrival in the States. Why? Because this was when tragedy finally struck. Reader discretion is advised.

What can be described as a bodily volcanic eruption, set in. I don’t know how it kept itself at bay for so long. Maybe the Imodium I took the night before? Possibly eating at the Hard Rock Cafe finally made it submerge? It could have also been the sinking feeling of Kallsy falling from 30+ft on the wheel of misfortune. But whatever it was, it came with full force and vengeance.

I felt my body break out in beads of sweat and immediately started shuffling down the path looking for any sign of a public restroom. Kallsy still following close behind and still oblivious. I came upon a fenced-in bathroom with a painted sign that read: “Ladies & Gents Toilet – User pay 20¢, Opening hrs: Mon-Sat: 6am-6pm” Scrambling I ran up to the window and shouted for Kallsy to bring the change. Finally understanding what was about to happen she ran up and gave the clerk the money. 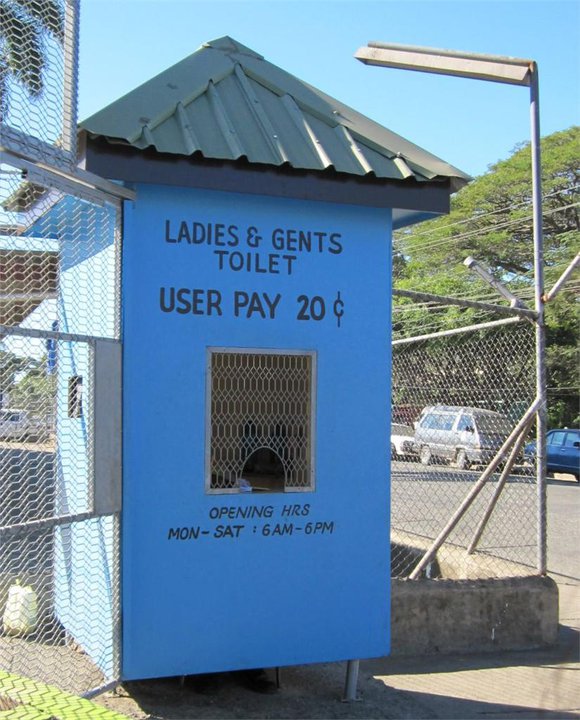 Thank you, I paid my dues.

I’ll spare you from the gory details of what happened next but let’s just say that I unleashed some powerful demons in that bathroom and after what seemed like many hours I left the tiny stall with the sandpaper toilet tissue defeated and horrified.

The look you give your then girlfriend of less than a year after your bathroom experience hoping she doesn’t say a word.

Seeing I had lost all color, Kallsy and I sat out on a journey to find Gatorade or some other electrolyte beverage. After searching around 6 shops we finally found some. Two large bottles of orange Gatorade for a whopping $5 a piece, I bought them willingly.

After I tried to muster what was left of my dignity and we decided to take a taxi with the others in our group to the beach. “Finally,” I thought, “maybe I can just sit on the beach by the sand and relax a little.”  Upon arriving at a row of hotels and resorts our driver informed us that we would need to walk the rest of the way and that the ocean was just a few blocks down the road.

Well, 5 miles from Bula Fiji later and completely delirious we finally reached the beach and the crystal clear waters that we dreamed of. I was ready to dip my toes in and feel the cool water on my aching feet when I felt a large punch in the back and felt my body go underneath the waves. The feeling of my lower half hitting the salt water nearly had me in tears. Kallsy, had tackled me apparently thinking that the water would refresh me and my spirits and as I arose from the sea, I closed my eyes and said: “Please God, just take me now.”

Seeing my obvious discomfort she realized she had made a mistake and I wasn’t about to lay out on the bare sand at risk of getting sand in my shorts so we walked to a nearby hotel that had a public restroom (THANK YOU) and a proper chair to sit on. That’s when a grand idea hit us, we could lounge by the hotel pool for the day, we were technically tourists after all so who would notice?

We found our friends and had access to pools with waterfalls, a swim-up café, hot tubs, and a nearby beach for the rest of the day. It was glorious and I even got a small nap in on a lounge chair. Sorry if you think less of us, we were reckless college students after all.

Walking over 5 miles in order to see this view was entirely worth it. 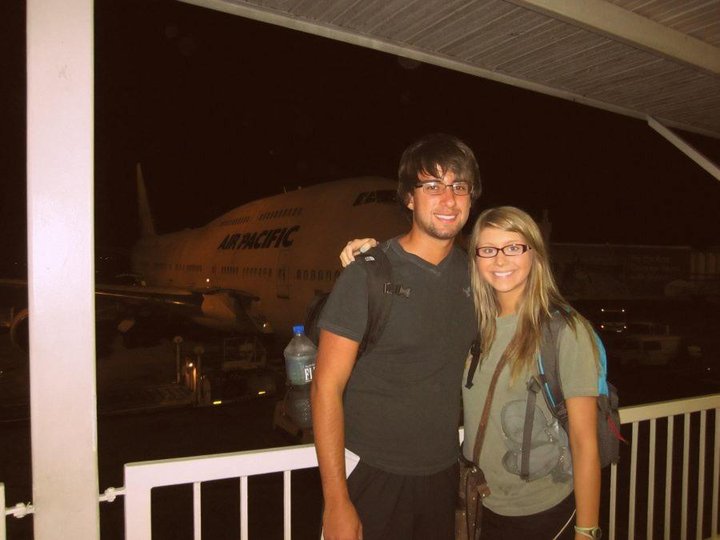 Here’s us getting ready to board the flight back to the United States. I might have had to force a smile.

After a few hours, we called a taxi to take us to the airport to head back to the States. This time, the new driver arrived and took us the whole distance (no more walking 5 extra miles). I was slightly worried because I was afraid Montezuma’s Revenge Pt. 32 could happen but I settled into my Economy Class seat and was given a breakfast that would suffice for someone who had just endured such torturous events when all of a sudden I saw a glass of orange juice fly towards me and spill all over my lap.

Now normally this wouldn’t have been a big deal, I always carry on extra clothes but today I hadn’t lucked out. So when I looked over and saw Kallsy cowering down and staring at the pulp covering my shirt, pants, and tray of untouched breakfast I was peeved. To make matters more terrific, she had taken a Benadryl to sleep and was out like a light within 20 minutes and 12,000 “I’m sorry’s.” I had taken an actual sleeping pill and sleep never came.

The duration of our the first 14 of 18 hours of flying was mainly spent glaring at my sleeping girlfriend as she leaned her head on the shoulder of another guy (also sleeping, not his fault or hers). Needless to say, I nearly kissed the ground when we finally landed and now take two extra sets of clothes in my carry on. And in case anyone is wondering, yes I would love to go back to Fiji – I’ll just find a different restaurant. 😉

Have you ever had to suffer through anything similar to my experience at Bula Fiji?
What has been one of your worst travel experiences? 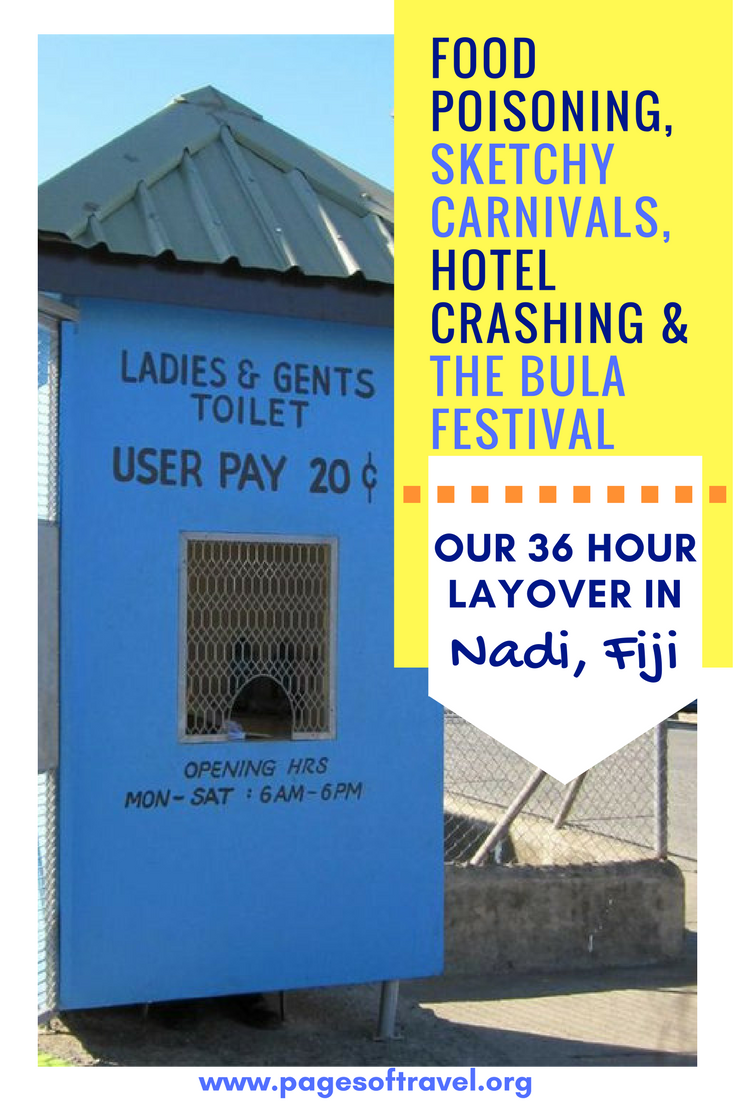 ARE YOU IN PURSUIT OF ADVENTURE? COME ALONG FOR THE RIDE!