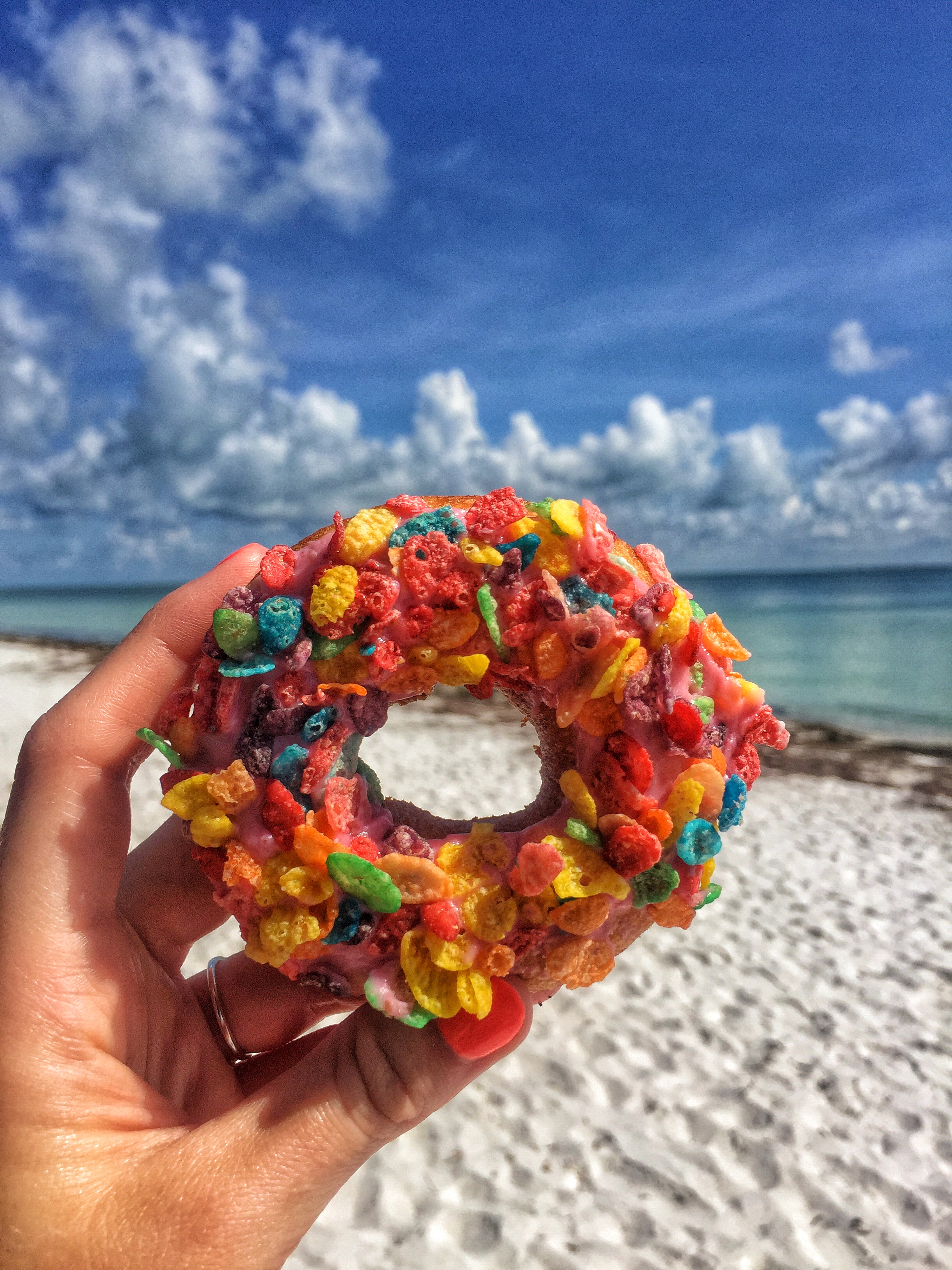 Disclaimer: This post contains affiliate links which we may make commission from. As always, we only recommend places and products we love!

No don’t be fooled, we’re not talking about Instagram-worthy donuts and ice cream here. Although these donuts are delicious and we might have had one… or two… okay three each. We’re talking about some of the most bizarre foods in the world!

Being from the United States, I would say that our cuisine is typically pretty tame. About the “craziest” we have here is a raw spicy tuna roll and even then some are squeamish at the thought of that.

I guess you could also count those ghost peppers. But I’ll leave that for you to figure out.

In this duo, both Logan and I are pretty adventurous when it comes to food, although I don’t eat many types of meat so that’s typically reserved for him. Sometimes trying new delicacies has been an awesome experience… I can still recall the first time I tried squid and eel (that sauce though… YUM).

Other times, it was downright terrible… Cue the time I had food poisoning from some bad airline curry only 3 hours in on our flight to Osaka. Did I mention I was next to the guy who was 12 beers in and puking every 8.3 minutes? No, it wasn’t Logan. Yes, I did try to get the guy some water. No, he didn’t want it and kept drinking beer. A mystery I’ll never solve.

And can we have a moment of silence for the time that I ordered TWO of what I thought was Yakitori but ended up being what can only be best explained as “cheese on a stick?” R.I.P. 2400¥.

Exotic, strange, acceptable, or not; we all live through a series of cultural customs and boundaries when it comes to the foods we eat. We’ve asked some of our fellow traveling friends to share some of the weirdest, craziest, most bizarre foods in the world. Here’s what they have served up for you!

Street vendors are often known for their interesting local cuisine while walking through the Nishiki Market in Kyoto we couldn’t help but be intrigued. These Tako Tamago are quite literally a glazed tiny octopus with a cooked quail egg shoved in the head. Upon reluctantly biting in you are surrounded with a chewy yet slightly sweet and salty flavor. It was definitely worth the experience but we didn’t find ourselves pigging out on them.

“This reminded me of the typical Asian dried seafood snacks. The stingray fins were crunchy and the flavor enhanced with the grill. I really enjoyed this as an appetizer as it’s really just like eating chips, and pairs well with beer. Imanishi was No 4 in Toronto Life’s best new restaurants in 2016.”

3. Tofu with Egg of a Thousand Years

Location: Paris, France (but it is traditionally a Chinese dish)

“We ate this dish at a Chinese restaurant in Paris. When we saw it arrive at our table, we really weren’t sure what to think. It looked really strange and we crossed our fingers as to the taste. Turns out, it was delicious! It was yummy soft tofu topped with an egg that had been marinated for 3+ months. We would totally eat it again!”

“Seahorses, starfish, hairy spiders the size of your palm, baby sharks, centipedes, snakes- every type of creepy crawly imaginable is available on a stick for your eating pleasure at Donghuamen night market in Beijing. We scanned each stall to look for the smallest, most benign-looking morsel to eat. The baby scorpions looked pretty harmless compared to the rest! What were they like? Crunchy, buttery, and actually damn delicious- they tasted a bit like KFC! It’s been 10 years since we poked these little suckers into our mouths and nowadays when we travel, we eat everything, but when it comes to weird, deep-fried baby scorpions top our list.”

“You may have heard of Kopi Luwak coffee from the movie The Bucket List. Jack Nicholson buys and drinks this coffee because it’s the most expensive in the world until he finds out how it’s made… A civet (a small wild cat in Asia) eats the coffee cherries for the fleshy fruit around the coffee bean. This actually upsets the civet’s stomach and they pass the bean rather quickly. People will painstakingly hunt for the remains left by a cat. They clean the beans and roast them to make the delicacy known as Kopi Luwak coffee.

The coffee was about 11 Euros for a full press, which I shared with a friend. I thought it tasted like normal coffee, a little acidic for my taste, but still a decent cuppa. Would I try it again? Probably not, but I think it was worth the experience. Plus, I like being able to say that I tried Cat Poop Coffee!”

“This is the BEST lobster I’ve had! That’s why this place is very popular, and they also have so many other seafood dishes like crab, oysters, eel, and more. Their lobsters are always flavourful and do not stick to the shell, which is very important! They have other sauces for the mountain but this is my favorite because it also has the anchovies, which goes so well with the lobster roe fried rice.”

“Nakji is a small octopus sliced up while alive and served immediately. Although the octopus is technically dead, nerve reactions cause the tentacles to squirm, making it appear to be alive. We have actually only had this dish during school staff dinners as it is considered a delicacy and isn’t really something we wish to have every day.

The octopus is served with sesame seeds and a spicy sauce. It doesn’t have a particularly strong flavour and is rather chewy. The strangest part of the whole experience is having to chew rather quickly as the suction cups on the tentacles grasp onto your tongue or the inside of your cheek while you eat it (Eeek)!”

Upon first glance, Uni almost looks like an orange animal tongue which, of course, will immediately put some people off. However, Uni is considered a luxury in Japanese culture and has a rich, creamy texture. Unlike what you would normally expect, it’s not at all “fishy.” We were warned by many people to steer clear of it because of it’s pungent taste but were pleasantly surprised at how mellow it was upon trying it fresh at a ryokan we were staying in.

“Craig and I had just over 24 hours in Bangkok to kill with two goals. One – party on Koh San Road. Two – eat bugs! Being the go-getters that us Scots are, we accomplished both, and had a headache to prove it. There was plenty of PR staff selling giant scorpions to backpackers on Khao San Road but we bypassed them opting for the more local option.

Luckily we stumbled across a stall selling a variety of our winged friends, flies! The server scooped them in a bag and I squealed to the fascination of a little girl who was also buying some snacks too. The fly itself tasted salty (seasoning) and the texture was dry with the wings crumbling apart in my mouth. A local passerby stopped to observe and have a laugh, we offered him the rest and he munched them down like a bag of crisps (chips). I think I’ll stick to cereal bars for snacks and suggesting temple visits as one of the best things to do in Bangkok!” What about you? Would you eat BUGS and prove them to be one of the most bizarre foods in the world?

“Bassam and I are both GIANT foodies, but surprisingly, I’ve never eaten anything too strange. Just the usual strange foods that I think most travelers have tried like escargot and chocolate-covered crickets. Bassam usually stays away from weird foods too, but when we are in Lebanon, Bassam’s home country, he will eat anything! One of his absolute favorite dishes, which I think is super weird, is called kibbeh nayyeh. It’s RAW minced lamb or beef, served with some mint leaves and olive oil. It’s prepared by being pounded, which people say makes it okay that it’s raw.

The other weird thing Bassam will eat in Lebanon is sheep balls. Those are served cooked, usually fried. Bassam’s grandma told him when he was younger that eating sheep balls will help him grow tall and strong. Well, Bassam is 6’2″ so I guess it worked?! Finally, Bassam used to eat this one all the time until he knew what it was made out of. It’s called ghamme. It’s sheep intestines stuffed with rice and meat and served with sheep tongue and skull in a stew. GROSS!!!!” Would you try one of these most bizarre foods in the world?