Gion Matsuri – The Most Historic Summer Festival in Kyoto, Japan 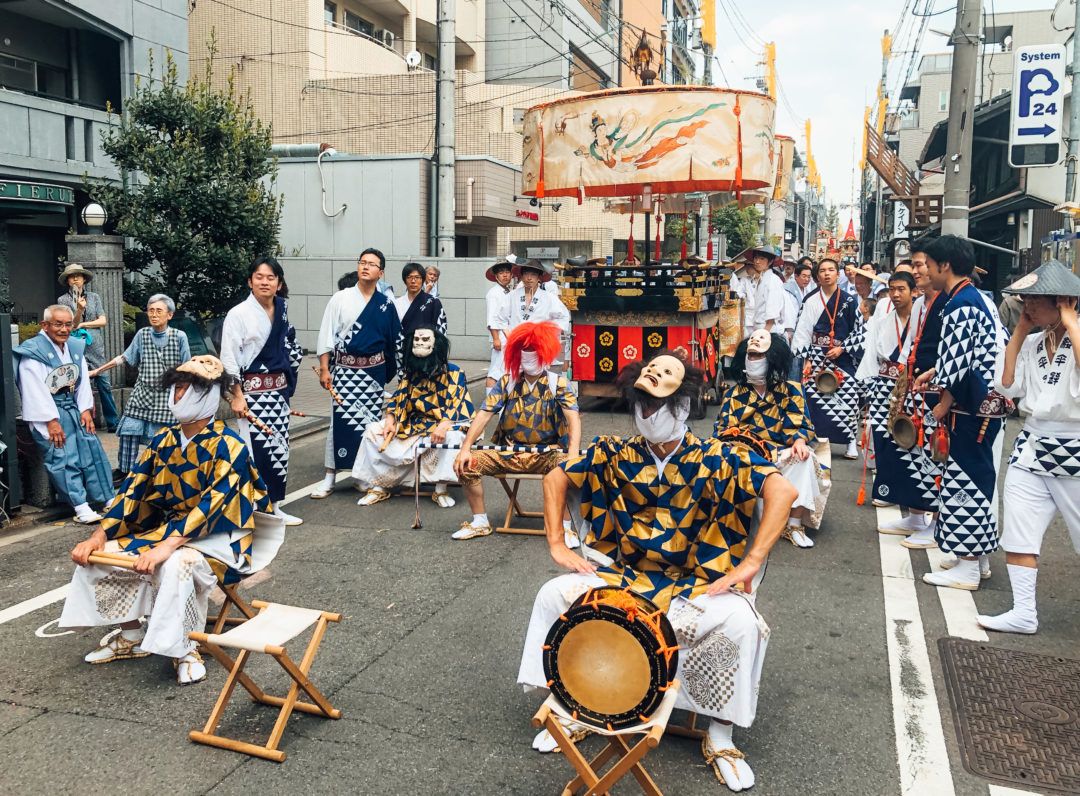 Disclaimer: This post contains affiliate links which we may make commission from. As always, we only recommend places and products we love!

Gion Matsuri is held in Kyoto and lasts for the entire month of July. It is by far the most popular summer festival in Japan and one of the most historic. The main attraction of Gion Matsuri is the Yomoboko floats that are rolled through the streets by festival participants who also entertain the crowd with instruments and dance.

Before we left for our three months in Japan we knew we couldn’t miss this event but we also had a surprise! Our friend contacted Logan before we left for Japan and asked if Logan would like to be a part of the parade under his family name.

Considering this was a once-in-a-lifetime opportunity he excitedly agreed and we arranged our schedule to arrive in Kyoto for the Gion Matsuri events so Logan could participate in the parade!

In this post you’ll find all the details for Gion Matsuri including how to get to Kyoto, where to stay, the history behind the festival, and tips for attending the events at Gion Matsuri.

Authors Note: Gion Matsuri has been canceled for 2020, but since this festival is an annual event you can still use this information to plan for future travel!

How to Get to Kyoto

Kyoto is extremely accessible from most major cities in Japan and it is also easy to get around in Kyoto too. If you are traveling internationally by plane you can fly into Kansai International Airport (KIX) in Osaka. Then from KIX you can take the Kansai-Airport Limousine Bus to Kyoto or take the JR Haruka Line to Kyoto as well.

Where to Stay in Kyoto

Kyoto is a city that we always return to when we visit Japan. We absolutely love this city! Each time we’ve visited we’ve stayed in different hotels in Kyoto but have now secured some of our favorite places to stay in Kyoto.

Our top favorite is Kyoto Granbell Hotel. It’s centrally located in the Gion district of Kyoto near the action of Gion Matsuri and has beautiful, comfortable rooms that are spacious – some even feature a king-sized bed which isn’t as easy to find in Japan.

Another hotel that I would recommend for Gion Matsuri is Mitsui Garden Kyoto Shijo. It is also in a good location for the festivities and is budget-friendly. Some of the rooms are slightly smaller than the Granbell but still comfortable. They also have rooms that are perfect for families or those traveling in a group!

The History of Gion Matsuri

Gion Matsuri is the festival for Yasaka Shrine in the Gion District of Kyoto. The first recorded Gion Matsuri was in 869 thus it is considered one of the oldest summer festivals in Japan! It was originally started as a religious cleansing ceremony to please the gods during a time of widespread illness but is now a yearly celebration.

Everything you’ll see in this festival is deeply based on the traditions that started thousands of years ago with little modifications made for the modern era.

One of the longstanding traditions of this festival is the selection of a local boy from a prestigious family to act as a sacred messenger to the gods. This role is called chigo or “sacred child.” There are actually multiple chigo that participate in the parade but this specific child is considered the most revered because he performs a sacred rope cutting during the main procession.

Once the festivities start on July 13, his feet are not allowed to touch the ground until they end on July 17. He sits on the Naginataboko float and is rolled through the streets of Gion.

The main attraction of Gion Matsuri is the floats. There are two different styles of floats called Yamaboko that are built each year with large timber beams and rope. After, they are decorated with lanterns, tapestries, and tassels making for an elaborate design. These 23 yama floats and 10 hoko floats are paraded through the streets of Gion.

The hoko floats are exceptional. They stand at 82 feet (25 meters) tall and weigh up to 12 tons! You might be wondering how they are moved through the streets considering how monstrous they are!

Well, they are actually pulled on huge wooden wheels by some of the participants involved in the parade and it’s quite a sight to see, especially when they turn corners. Participants have to be exceptionally careful to not hit trees, buildings, or power lines when turning.

During the three days prior to the main parade, there are evening street parties known as Yoiyama where visitors can admire the floats and purchase a chimaki (good luck charm) from the floats while enjoying street food and playing carnival games. The floats look exceptionally pretty illuminated at night!

Also in the evening, some of the oldest and wealthiest families of Kyoto open up their stores or traditional machiya homes where they display family heirlooms, art collections, and other treasures for the public to view.

You can often find the collection owners or their families waving from the windows in Gion. Now, you can’t enter the shops or homes, but all of the relics are easily viewed from the outside. It’s fascinating to see such history on display!

Gion Matsuri lasts the entire month of July, but the main event, the procession of the floats, is held on July 17. This parade is known as Sama Matsuri Junko (starting location of the parade). The events start at 9am and last until around 1pm, although the year we went Kyoto had record-breaking heat and it took extra time to complete the route. I believe we were done around 2pm.

The parade path follows a 1.8 mile (3 km) route along Shijo, Kawaramachi, and Oike streets in Kyoto. All participants are dressed in traditional costumes but their outfits vary depending on their role. Some participants in the festival are in charge of moving the yama or hoko floats and others are in charge of entertainment such as playing instruments, dancing, or engaging with the crowd.

Since Gion Matsuri is the most famous summer festival in Japan, it is also one of the most crowded. You can witness the float procession from the sidewalks or you can also pay for seating in front of the city hall starting at 3,180 yen (just make sure you book in advance!). I suggest making sure you get a spot on the corners of the streets to watch the parade participants turn these massive floats!

On July 24th a smaller parade takes place, known as Ato Matsuri Junko. Far fewer people attend this parade as it only includes 10 of the floats versus the full 23 in the main procession. However, if you don’t want to deal with the crowds, this is an alternative option!

As I said at the beginning of this post, when we attended Gion Matsuri, Logan was actually a part of the parade with our friend Shin! But I witnessed the parade from the sidewalk so I had the ability to move around and watch from different streets since the parade takes a long time. It was a cherished experience for him, and he felt honored to be able to participate alongside our good friend.