Tenjin Matsuri – Japan’s Festival of the Gods in Osaka 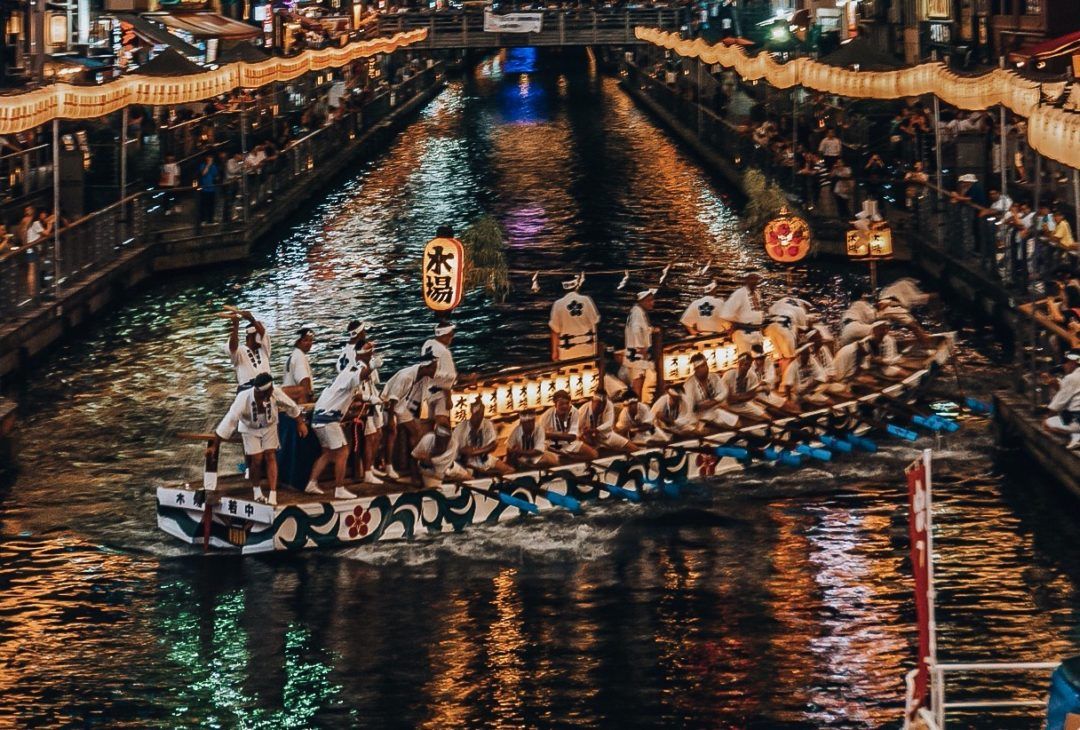 Tenjin Matsuri in Osaka is ranked one of the top three summer festivals in Japan alongside Gion Matsuri in Kyoto and Kanda Matsuri in Tokyo. It is known as the festival of the Tenmangu Shrine and honors the deity Sugawara Michizane, the deity of scholarship or learning.

During this event, you’ll find traditional dancing and a procession of shrines that lead to a river where participants show off their rowing skills on boats. At the end of the festival, there is also a large fireworks show!

How to Get to Osaka

Osaka is one of the largest and most visited cities in Japan making transportation to, from, and around Osaka extremely accessible! You can travel to Osaka by airplane, car, or by train.

If traveling internationally to Osaka you’ll most likely fly into Kansai Airport (KIX) but if flying domestically in Japan you could also fly into Itami Airport (ITM) which is closer to the city center. Most flights from Tokyo to Osaka take about 1-2 hours depending on the leg and airports used.

If driving to Osaka from Tokyo you’ll take the Tomei and Meishin Expressways which takes roughly six hours without any interruptions or traffic. If you plan on driving to Osaka from Kyoto it only takes about an hour.  However, I personally think traveling to and around Osaka by train is much easier than driving in Osaka considering the ample access to public transportation, plus the driving tolls are very expensive around Osaka.

Where to Stay in Osaka

If the main reason you are visiting Osaka is to attend Tenjin Matsuri then I would suggest staying in a hotel close to Osaka Castle because it is close to a number of the Tenjin Matsuri activities. However, there are a number of other places you can choose to stay in Osaka as well.

We have been to Osaka a number of times and stayed in a few different hotels. Out of the ones we’ve stayed at, here are our favorites.

The first hotel I would recommend is Kaneyoshi Ryokan. This hotel is perfect for couples or solo travelers that want to be in the middle of the action in the heart of Dotonbori. The only downfall is that this area can be a bit noisy late at night due to the karaoke bars nearby and does have a 1am-6pm “curfew” but we never had an issue with that during our time in Osaka.

The next hotel is Hotel Brighton City Osaka which is a little further away from the main Osaka attractions but it is in a quieter area that is perfect to escape the chaos of Tenjin Matsuri. The hotel itself is spacious, affordable, and has convenience stores and grocery stores just a few steps away. It is also a great hotel for families.

The History of Tenjin Matsuri

Tenjin Matsuri which translates to Festival of the Gods has been celebrated in Osaka for over a thousand years. The first festival is said to have taken place in 951 at Tenmangu Shrine where Sugawara Michizane, the god of scholarship or learning is housed and has been held there ever since.

On July 24, the first day of the festival, the celebration begins with a prayer from one of the high priests for Osaka’s prosperity and safety and a shishimai lion dance as an invitation for Sugawara Michizane to leave the shrine. This allows the deity to be paraded around the city by the 3,000 festival participants while being honored by the people attending the festival.

After the initial ceremony, there is dancing, singing, and stands with street food and games by Tenmangu Shrine.

On the first evening, a parade of boats can be found in the canals of Dotonbori around 8pm. This spectacle is to practice for the main celebration and entertain visitors. It’s wild to watch the boats turn in the narrow canals all while those on the boats yell out chants and others play the taiko drums – the teamwork displayed is incredible!

READ MORE: What to Eat in Osaka

On July 25, the main celebrations begin at 3:30pm. First, there is a land procession of the three portable shrines that are said to house the spirits of the shrine’s deities. This starts at Tenmangu Shrine and travels through the streets of Osaka to the Okawa River.

You can even see the participants move the shrines through shopping arcades in Osaka too! The parade has a number of participants dressed in costumes and dancers to accompany the shrines.

Around 6pm the festival participants and the shrines reach the Okawa River and are loaded into 100 ceremonial boats that are docked there. Once the boats are loaded, they begin the parade up and down the river.

Some boats perform songs on taiko drums and other instruments, others demonstrate their rowing skills like that seen in the Dotonbori canals the previous night, and some even have bonfires on them!

There are a number of areas where you can watch this procession for free but there is also paid seating located next to Temmanbashi Station. Prices for paid seating start at 6,000 yen a ticket and while we heard you can easily see the boat procession, it offers limited visibility for the fireworks so unless you need a place to sit and watch, I’d recommend taking your chances with the free spots (here is about where we stood to watch!).

All along the river are rows and rows of street food stalls, games, and crafts where you’ll walk shoulder to shoulder alongside thousands of others – all part of the fun!

Then from 7:30pm until around 9pm one of Japan’s most famous fireworks displays begins on the river as the boats continue to make their way until the end of the fireworks.

Once the fireworks start chaos erupts! This festival is already pretty packed but police officers and other public officials attempt to guide the crowd along the blocked off streets and bridges in order to help with the flow of traffic.

However, the fireworks can be a beautiful distraction so be prepared to walk in tiny steps as you leave the main festival area. Once the fireworks are over, festival participants disembark the boats and make their way back to the shrine.

Would you like to visit Tenjin Matsuri in Osaka?