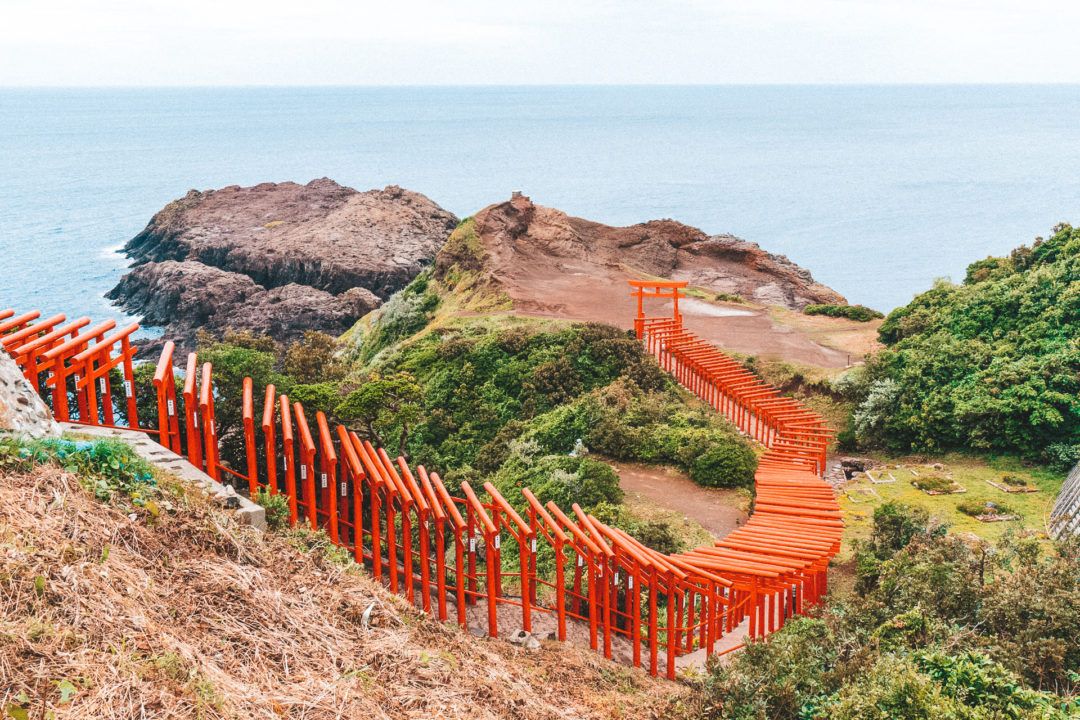 Where is Motonosumi Inari Shrine?

There are many other shrines and temples as well as terraced rice fields that offer a stunning mirror-like view at sunrise and sunset. In southern Nagato, there is a centuries-old, hot spring resort called Yumoto Onsen.

How to Get to Motonosumi Inari Shrine

The way we traveled to Motonosumi Inari Shrine is by car. Because we were traveling from the Kyushu Prefecture we took Highway 491. If traveling by car we recommend setting your car’s GPS to your language and using that as it’s typically the most accurate. However, we also recommend using Google Maps.

If you plan to visit Motonosumi Inari Shrine by taxi you’ll take a train to Nagato-Furuichi Station which is about 20 minutes away from the shrine by taxi one-way (about 2,000 yen). While we were visiting, we also noticed that a number of taxis were parked at the shrine so you shouldn’t have any trouble getting back to your hotel or the train station after your visit! 🙂

During our visit, we saw many tour buses pulling away from Motonosumi Inari Shrine. The downfalls of traveling by tour bus are, it is more expensive than hiring a taxi, you have a time constraint, and it will undoubtedly be busier because you will be visiting with many other tourists on your bus. However, if you are traveling in a large group, this might be your best option!

READ MORE: Things to Know About Driving in Japan

Where to Stay in Nagato

Because the area near Motonosumi Inari Shrine is quite rural, there aren’t many places to stay in the area. However, we found a seaside inn that was absolutely amazing.

After visiting the shrine, we went to a few other places in Nagato and stopped at a 7Eleven to get some snacks and items for dinner that evening. We went back to Sea Breeze 1987 for the evening and made it just in time for the rain to start pouring down!

This hotel was the perfect place to sit outside on the patio and watch the powerful waves crashing into the side of the cliff. Some rooms at the Sea Breeze 1987 have private bathrooms (ours did) while others had shared bathrooms. It also has barbecue facilities, complimentary toiletries, a shared lounge, and breakfast every morning in the lounge.

Our room at the Sea Breeze 1987. It had a private bathroom and a loft for additional guests (perfect for families!).

Look for other places to stay in Nagato

The History of Motonosumi Inari Shrine

The story behind Motonosumi Inari Shrine is quite interesting! Especially because this shrine isn’t very old. It was built in 1955 after a white fox came to Okamura Hitoshi, a local fisherman, in a dream. The fox told him that if he was to build a shrine for the white fox, good luck would come to the Nagato area. So, he did just that! While most of the time, foxes are known for their cunning, the white fox is respected for its wisdom and protection from evil.

READ MORE: Important Things to Know Before Traveling to Japan

What to Expect When Visiting

After arriving at the shrine we first parked our car in the large parking lot that is available for guests. Then, we were guided to the bottom of the hill to walk up the stairs to the top of the shrine so that everyone was heading in the same direction. The path inside the torii gates is a little narrower than that of Fushimi Inari Shrine so it would be more difficult to have people moving in both directions.

However, before heading up the stairs to get to the top, we first explored the lower level area of the shrine by the rock formations next to the Sea of Japan. Here, we were also able to see Ryugu no Shiofuki, a natural sea spout that mists the side of the rocks as the waves crash in.

After taking some time to admire the waves and cliffs, we started our journey up the path under the 123 vermilion torii gates. When we visited most of the tour buses had left for the day. Because of this, there were very few other tourists visiting so we were able to take our time on the path.

Once you reach the largest torii gate, be sure to look towards the top for the offering box. It might seem peculiar to have an offering box hung highly on a torii gate considering most are easily accessible, but this one is meant to be challenging! If you are able to get your coin in the box, it is said your wish will come true.

Before leaving, make sure you take time to admire the view from above, it’s simply one of the best. The contrast with the greenery, rocks, blues of the sea, and the reddish-orange torii gates make for such a stunning, picturesque setting.

It’s easy to see why this shrine is considered to be one of the most beautiful places to visit in Japan! Let us know if you visit this remote, stunning shrine.