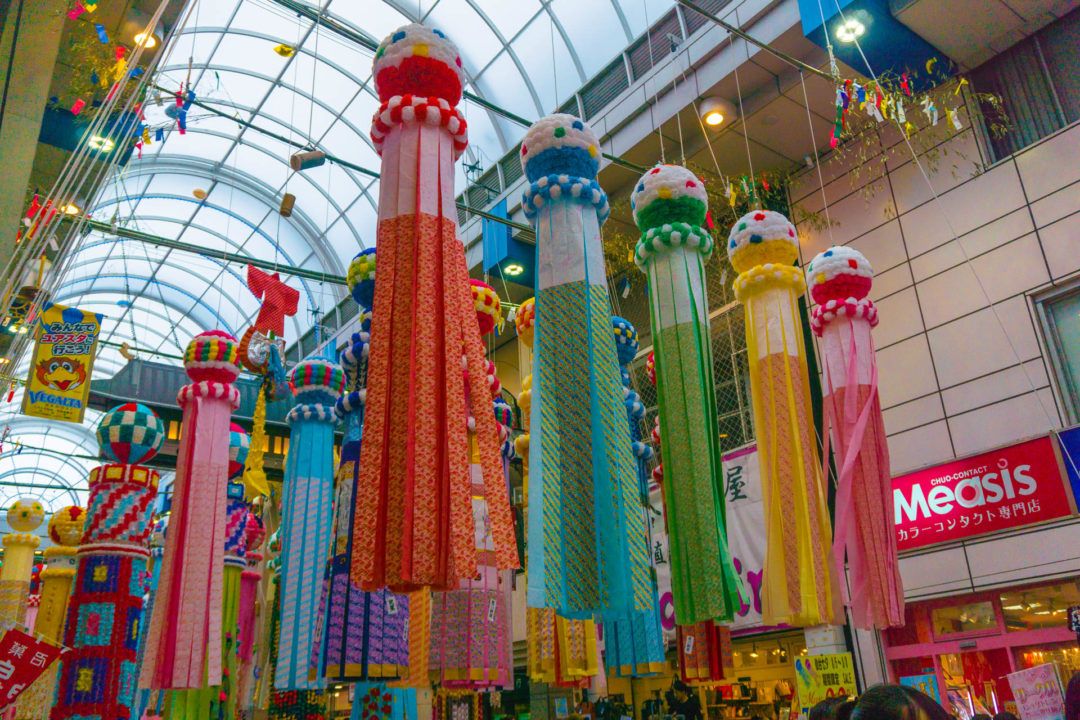 Tanabata festivals, also known as star festivals, are held all over Japan typically on the 7th day of the 7th month. But, Sendai Tanabata is one of the largest Tanabata festivals attracting nearly 2 million visitors each year.  The main events take place on August 6-8 in correlation with the old Chinese calendar.

At Sendai Tanabata Festival you’ll find a number of unique activities like wearing a Japanese summer kimono called yukata, massive paper streamers hung high from the ceilings of shopping arcades, and music and dance performances on stages located in various parks in the city.

How to Get to Sendai

The best way to get to Sendai is by bullet train from Tokyo. In Tokyo, you’ll take the Tohoku Shinkansen to Sendai Station which takes about 1 hour 40 minutes.

There are also highway buses that go from Tokyo to Sendai but they take around 6 hours 30 minutes to arrive in Sendai so taking the shinkansen is your best option!

Where to Stay in Sendai

Although a business hotel, the room was decently sized and comfortable while also remaining budget-friendly. If you are a solo traveler, traveling as a couple, or in a small group that is looking for multiple rooms this hotel is a great choice.

The Origin of Tanabata

Though there are a few variations of this story the basic premise is focused on two lovers, Princess Orihime a seamstress who worked alongside the Milky Way, and Hikoboshi, a cow herder.

Princess Orihime became incredibly sad and desperate for love as she felt her life’s only meaning was to create beautiful clothing. When her father, the god of the heavens saw this, he too was disheartened by his daughter’s sadness and set up a meeting between her and Hikoboshi who lived on the other side of the Milky Way.

The two fell madly in love and were married but then trouble arose. Princess Orihime and Hikoboshi both stopped working which caused Orihime’s father to become exceptionally angry. He forbade them to be together while his daughter pleaded with him.

Due to his love for his daughter, he allowed the two lovers to meet once a year on the 7th day of the 7th month should they both continue with their jobs.

But since the Milky Way is difficult to cross, the only way Princess Orihime can make it across the river is when a flock of magpies comes to help make a bridge for her. This, if it rains on Tanabata, the magpies cannot come and help her and the two have to wait another year before they can meet. Which is why Japanese people always wish for good weather in Tanabata.

READ MORE: Things to Know Before Traveling to Japan

The Events of Sendai Tanabata

On August 5, the festival kicks off in the evening with a beautiful fireworks display alongside the Hirosegawa River near Nishi Koen Park where visitors gather to watch.

Then on the morning of August 6, dress up in a yukata and walk to the main attraction of Sendai Tanabata – the streamers! The streamers are quite large in size, ranging from 10-20 feet (3-5 m) in length, and made by local schools and businesses with vividly colored washi paper and bamboo. You can find them hanging high from the ceilings of shopping arcades around the city.

Alongside the streamers, you’ll also find other smaller decorations like paper cranes that symbolize long life, paper strips for good handwriting, nets for a bountiful harvest, and other unique displays. All of the streamer decorations are extremely picturesque and unique so be sure to visit a number of the different areas where they are located!

In some of the parks and streets nearby to the shopping arcades, there are also stages set up for performances, with live music, dance, and other entertainment next to a bunch of food vendors.

Another display unique to Tanabata festivals is the bamboo trees that are filled with paper decorations and pieces of paper. You might not think it’s much at first glance but this is an incredibly important part of any Tanabata festival. Visitors write down their wishes on tanzaku (colored paper strips) and hang them on the tree in hopes they will come true.

On the last day of the festival shop owners take down their streamers and leave them on the floor of the shopping arcades to be collected by visitors to take home – we didn’t attend the last day of Sendai Tanabata so we didn’t see this in action, but it would make for a fabulous souvenir to take home!

Would you want to visit Sendai Tanabata Matsuri?