The Best Breweries in Northwest Arkansas 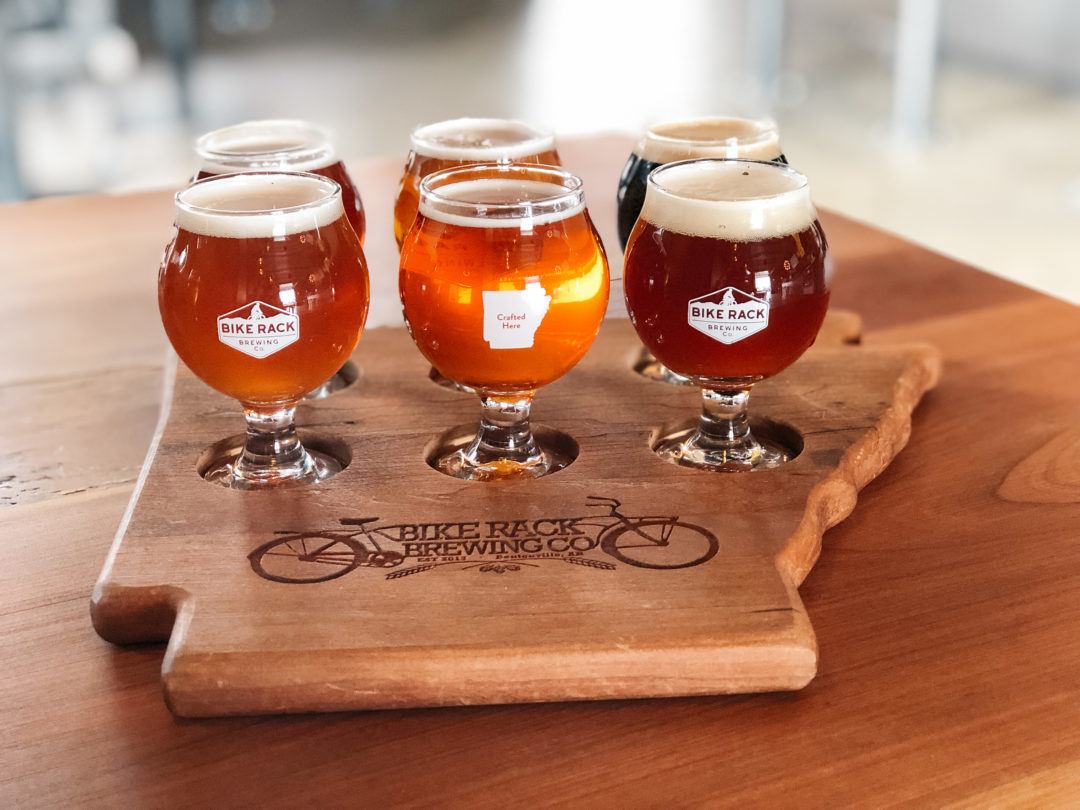 The Best Breweries in Northwest Arkansas

After living in St. Louis, the home of Anheuser Busch, we became pretty acquainted with the beer scene in the city including a number of craft and microbreweries. I mean, we’ve even heard people even call Budweiser, St. Louis tap water because the beer scene is so huge there. We often would visit breweries with friends for a quick bite to eat, trivia nights, and birthday parties.

So when we decided to move to Northwest Arkansas we were a little worried we were going to miss hanging out at local breweries. However, after a quick search on Google, we were surprised to find out that Northwest Arkansas has a number of locally-owned microbreweries and there is even a self-guided brewery tour that you can go on called the Fayetteville Ale Trail which is free to participate in!

Here are what we think are the best breweries in Northwest Arkansas all of which are included on the Fayetteville Ale Trail plus a few extras so make sure to request a passport before you start to visit so you can turn it in for a prize once completed!

The Best Breweries in Fayetteville

Established in 2012, Fossil Cove Brewing Co. focuses on creating quality craft beers of the American and Belgian varieties. The brewery gets its water from nearby Beaver Lake, thus naming their beer after Fossil Cove which is located there.

You can buy Fossil Cove beers at a number of different locations all over Arkansas, but their Fayetteville tasting room is their primary location. Our favorites are the Paleo Ale which is an American Pale Ale and the Belgian-style T-Rex Tripel when we can get our hands on it but if you happen to be visiting in the summer and see their Orange Cream Ale on tap don’t miss out on it!

Crisis Brewing Co. not only has great beer but a great story behind its brand. Liz and Sean Slape created Crisis Brewing Co. after what they considered to be a “mid-life crisis.” They wanted to create a brewery where you could come and enjoy the company of others over a cold pint of beer and I’d say they succeeded.

While I know IPAs can be hit or miss for some, the Identity IPA is the perfect “less hoppy” IPA if you’re wanting to try one out. Otherwise, I recommend the Bolands Irish Red Ale or the O-Face Cream Ale.

Boston Mountain Brewing is one of the breweries in Northwest Arkansas that we have yet to visit. But I’ve heard that it’s a place where you can feel right at home while enjoying one of their craft beers or a cocktail. I’ve been especially interested in trying their Peaches ‘n Cream Milkshake IPA, the Kolsch, and Nugget Pale Ale.

Located on the historic downtown Fayetteville Square, West Mountain Brewing Co. is Northwest Arkansas’ oldest brewery. We first enjoyed some beer at West Mountain Brewing Co. when we went to meet with friends at Tiny Tim’s Pizza, another local Fayetteville favorite. We really enjoyed their Blonde Ale, the seasonal Oktoberfest, and the fruit beers like the Blood Orange IPA and Chocolate Cherry Stout for a richer pour.

When we first moved to Northwest Arkansas we went on a date at Apple Blossom Brewing Company to grab dinner and a beer flight and were so sad when they permanently closed! However, hope was restored when we saw they were reopening under new ownership in 2021.

As of now, we don’t know what changes this will entail, but we’re excited to see what their new menu will look like plus see if their beer menu will stay the same or change. We’ll keep you posted on when you can re-add this to your list of breweries in Northwest Arkansas.

Of these breweries in Northwest Arkansas, Columbus House Brewery and Tap Room is one of the smallest. But while they may not produce as much beer as some of the other local breweries, they still have a number of terrific beers to try! I recommend the Yellow Card Golden Ale which is light and refreshing or the Nutty Runner Brown Ale which has a slightly roasted flavor. One of the seasonal brews I’d like to try at Columbus House is the Twinter Ale, which is a Chai spiced cream ale. It just sounds really interesting and unique!

JJ’s Beer Garden & Brewery is Northwest Arkansas’ best beer garden. They have a number of fabulous beers to choose from, a large menu with American food favorites, a live summer concert series, and a number of outdoor lawn games and other activities. If you are looking for a chill place to hang out with friends, this is definitely the spot! As far as their beers go, we recommend JJ’s Raspberry Wheat for a nice, crisp summertime beer and the Hefeweizen.

READ MORE: Things to Do in Fayetteville, AR

The Best Breweries in Springdale

Black Apple is a little different than the other breweries in Northwest Arkansas because it is actually a cidery, the first cidery in Arkansas to be exact. They produce flavored hard ciders using no artificial flavors or preservatives. I love their year-round Hibiscus Cider but am also a big fan of the seasonal flavors like the Raspberry Passion, Pineapple, and the Melon which is great as a slush!

Core Brewing & Distilling Company is definitely one of our favorite breweries in Northwest Arkansas because of their variety and fun limited releases. I am a big fan of coconut anything so I really enjoy their Toasted Coconut Brown Ale but the Razorback Red Ale is also a great choice and one of their most popular.

Recently they added a hand-crafted spiked seltzer to their ensemble called Scarlet Letter which currently comes in three signature flavors and is great for those who don’t enjoy beer or want something a little lighter and different.

Saddlebock Brewery is considered to be the first production brewery in Northwest Arkansas and prides itself on providing quality small batch European-style beers with environmentally-conscious practices. I personally like the Arkansas Farmhouse Ale which is made with organic rice and grit that is milled at the local War Eagle Mill in Rogers. Another one I recommend trying is the Dunkleweiz which is dark malty beer.

The Best Breweries in Rogers

Hawk Moth Brewery is located in historic downtown Rogers that creates as they put it “craft old-world beer styles with a modern American twist.” Some of the unique brews they have are the Interurban which is a light, wheat-based beer, and the Somewhere In Between which is a caramel rye amber ale. After getting a few beers check out some of the local stores in Downtown Rogers and grab a bite to eat. We recommend Hammontrees if you haven’t been there before!

Another Northwest Arkansas brewery located in downtown Rogers is Ozark Beer Company. They have all the typical beers you’d find at a brewery like ales, stouts, APAs, and IPAs which we would both recommend. But if you have the chance, definitely try one of their small-batch beers that are typically seasonal or there for a limited time. If you like one of the small-batch beers don’t leave without buying a growler of it to go!

Natural State Beer Company is the perfect spot to stop on a bike ride on the Razorback Greenway and has a fabulous patio that overlooks the lake while enjoying one of their European-style lagers. If you want a lighter beer go for the Greenway Light Lager or Pilsner but if you want something more hoppy try the IPL which is similar to an IPA but more smooth.

New Province Brewing Company has a fabulous brewery and taproom in Rogers. The thing I love about them the most is that they’re always looking to add unique flavors to their brews always making for a fun experience. One of the most interesting is LAVISH which is a lavender-infused IPA with the perfect amount of lavender flavor.

Another is the Cafe Muy Especial which is a Mexican coffee stout brewed with a number of spices and chipotle peppers to add a slight kick! For year-round flavors, I recommend the Space Suit which is a citrusy ale, or the Commoner, an amber cream ale.

Rendezvous Junction Brewing Co. was started by Mike Peerson, who after moving from Seattle, a craft beer haven, found that Arkansas was in need of craft breweries so he decided to start his own with Levi, a friend of his who was also a beer fanatic. They now have over 70 special recipes for their beers including the Vanilla Coffee Porter brewed with local Onyx Coffee.

Location: 2001 S Bellview Rd suite 2, Rogers // MAP
Hours: Currently they are working on building their own taproom but you can try a number of their beers at Bentonville Tap Room.

The Best Breweries in Bentonville

Bike Rack Brewing Co. got its name for the large biking community in Northwest Arkansas. Did you know that Bentonville is actually the mountain biking capital of the world?! Bike Rack is one of the largest local breweries in Northwest Arkansas having multiple locations and it’s also one of our favorites to visit for local events and music.

We especially enjoy sitting out on one of their patios on a nice day after a long bike ride. We’ve gotten a number of flights from here and enjoyed all of the beers we’ve tried, year-round and seasonal, but I’d say that the Oatmeal Stout and the Amber Ale are my two favorites.

Bentonville Brewing Co. started in 2015 and recently opened a new location with a spacious taproom in the heart of Bentonville. They currently have 24 taps in their tasting room including year-round and seasonal beers and are working to create a menu with German-style pub food.

Some of our favorites include the 1872 Old Fort Lager, Homewrecker IPA, and Soul Shine Kolsch. Bentonville Brewing Co. is also a great family-friendly brewery with a playground and small pump track for kids to enjoy while you are able to take some time to relax.

READ MORE: Things to Do in Bentonville, Arkansas

The Best Breweries in Siloam Springs

Unfortunately, we haven’t made it over to Ivory Bill Brewing Co. yet but it’s another local brewery in Northwest Arkansas we’ve heard great reviews about. Ivory Bill is located in downtown Siloam Springs which is just 30 minutes away from other areas of Northwest Arkansas. I’ve peeped at their Instagram a number of times because I love the interior of their brewery and I always enjoy seeing the adorable photos of Honey, the brewery dog. 😉

The Best Breweries in Eureka Springs

Eureka Springs Brewing Co. has small-batch beers, wines, and ciders available in their beer garden where you can also enjoy the outdoors and games like disc golf. They strive to make this a cozy space to relax and you can even bring your own food with you to enjoy with any of their beers. The Wild Wheat and Black Gold are two beers that are very popular so that’s where I’d suggest starting.

READ MORE: Fun Things to Do in Eureka Springs, Arkansas

Which of these do you think are the best breweries in Northwest Arkansas?